It’s now mid-May, which means the course has been back in action for a little over a month. As the grounds crew is gearing up for a heavy Tournament season (our first was Tuesday!), there’s been a lot of activity. Obviously, there’s the daily maintenance like mowing greens, mowing rough, changing cups, raking bunkers, filling divots on tees and collecting garbage. We’ve also had to tackle some larger jobs thus far:

Since the start of this season, we’ve removed approximately 70 trees. With the stumps ground, these vacant areas are now seeded and ready to grow grass. The major impetus for all this tree removal was overcrowding on the course. These select spots of turf needed more sunlight and air movement. 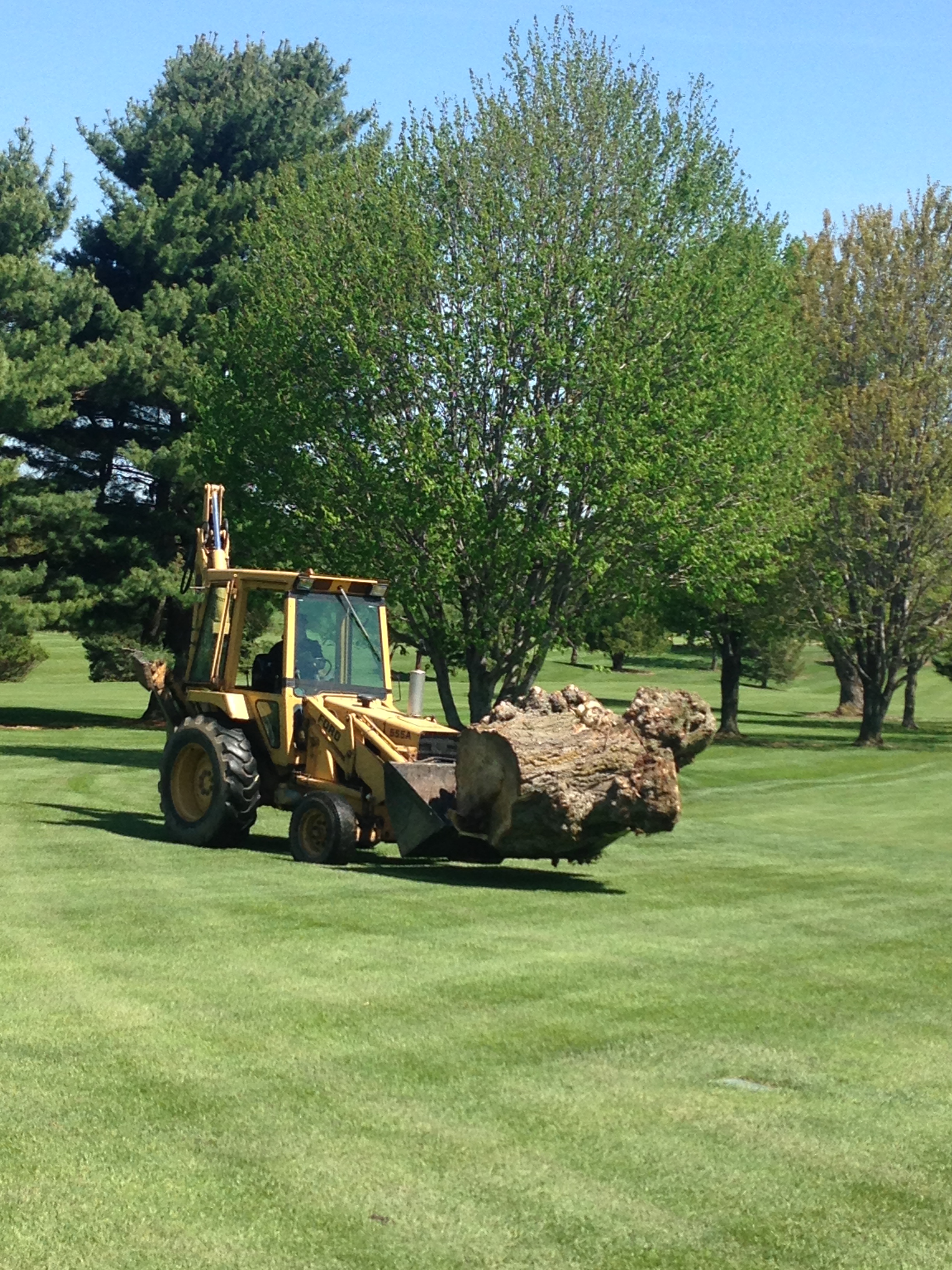 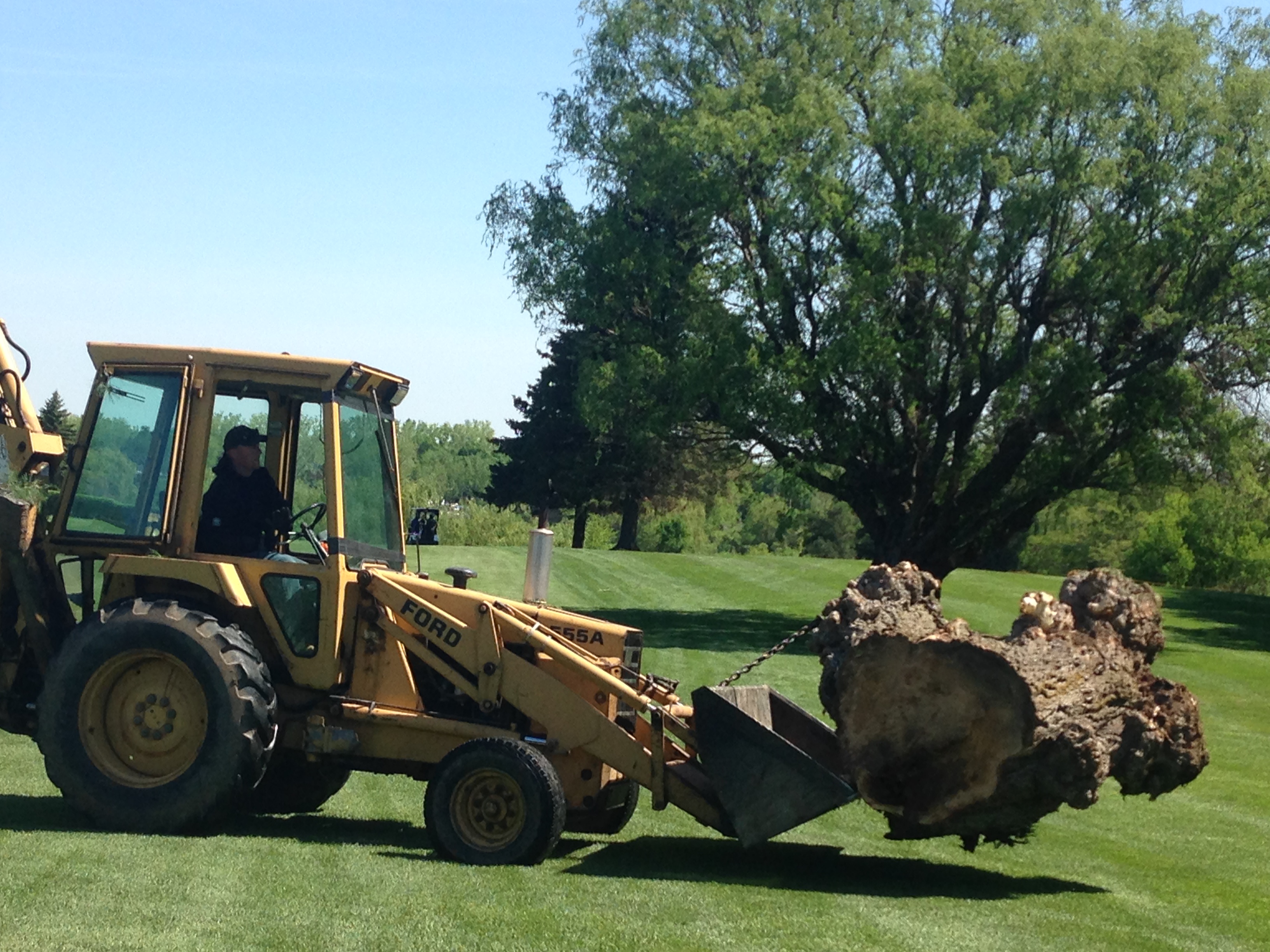 Crazy to think that the 70 removed trees won’t really even make a dent on our total tree count! Don’t worry- those traditional tree-lined fairways you love so much will not be affected.

Just last week, Thad made two major breaks to the irrigation line in the middle of 2nd fairway, shown below: 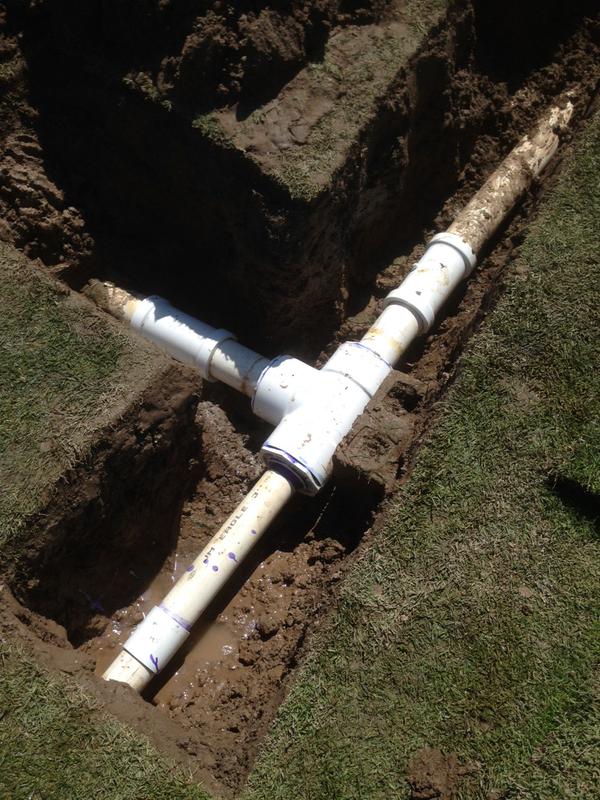 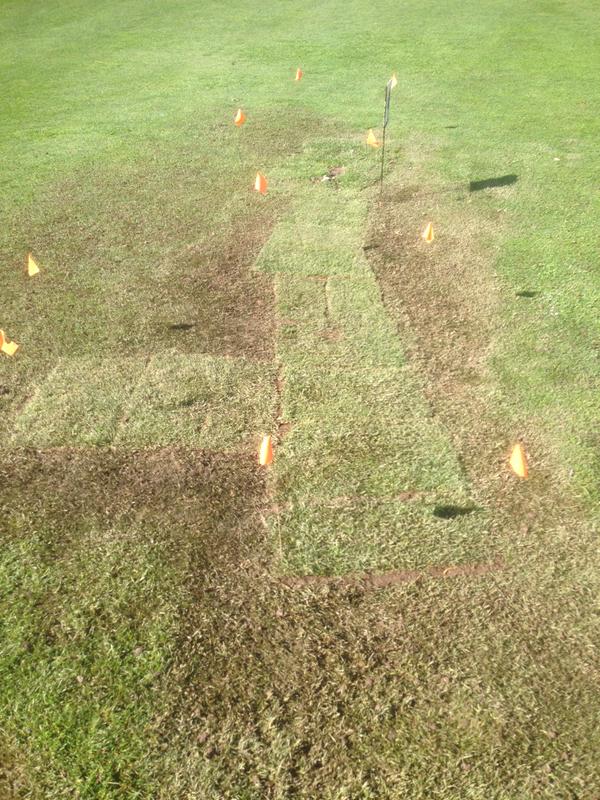 Take a look at the 2nd fairway now, only a week later, and you wouldn't even be able to tell where the digging had occurred! Seriously, we'd bet on it!

The bunkers are more of an ongoing project for the 2015 season, not something we’ve tackled yet. However, it’s been a little bit since the bunkers have received some serious TLC, so that’s on the horizon for us. Adding sand, and evaluating each bunker individually to address their maintenance needs will really go a long way into getting our bunkers, and the course as a whole, into tip-top shape.

If you're in agreement that Thad and his crew have been hard at work in order to make our playing conditions exceptional, then please take a second to vote for us in the BuffaloGolfer.com poll for Best Public Course in WNY: http://wp.me/p20nYT-34L. We really appreciate it! 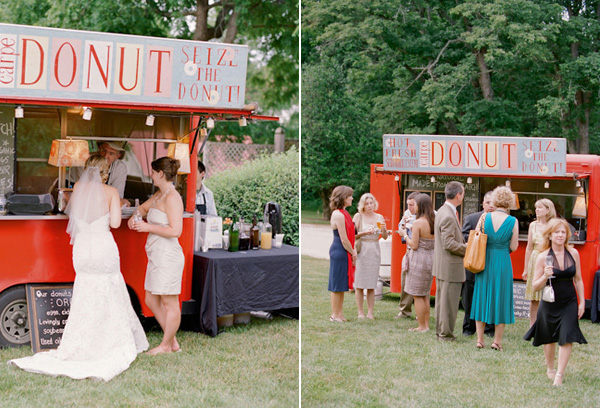 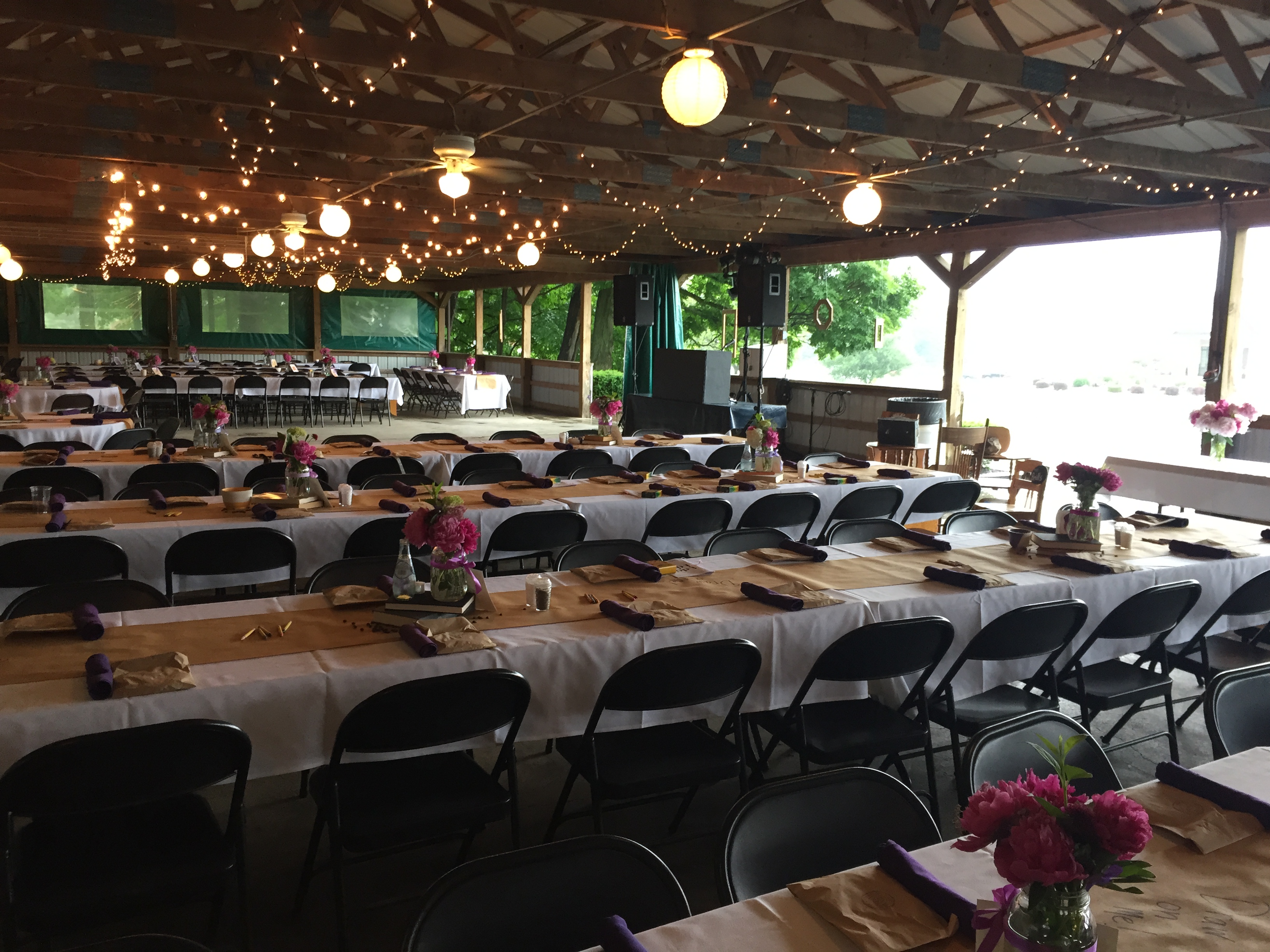 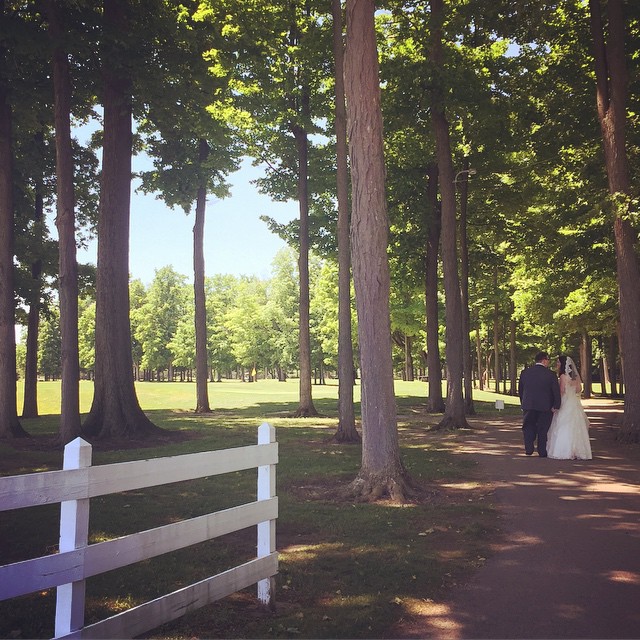 Superintendent Spotlight and Course News (that you've been waiting for)

We thought it was appropriate to introduce you to our Superintendent on the eve of the first nice weather of the year. Say hello to our course Superintendent, Thad. He’s the main reason why we’re able to claim our public course has “Country Club conditions”. We often hear that our course is the first to dry up after a major rainfall, or unfortunately, after winters like these. Of course it’s all true, with all the credit going to Thad and his grounds crew.

Thad graduated from the Turf Management Program at SUNY Delhi and has been employed in the golf course industry since 1989. He is a member of the New York State Turfgrass Association and has been an active member of the Golf Course Superintendents Association of America (GCSAA) for over 14 years. He is also a board member of the Western New York Golf Course Superintendent's Association (WNYGCSA). Thad is responsible for all phases of Golf Management and Agronomic operations, cost control, and grounds crew personnel. Thad is a 2013 graduate of Leadership Genesee.

Thad was also a cornerstone participant in this past November's #NoShaveTerryHills campaign. We had fun watching him itch his way through the month, growing out both his beard and his hair for charity! 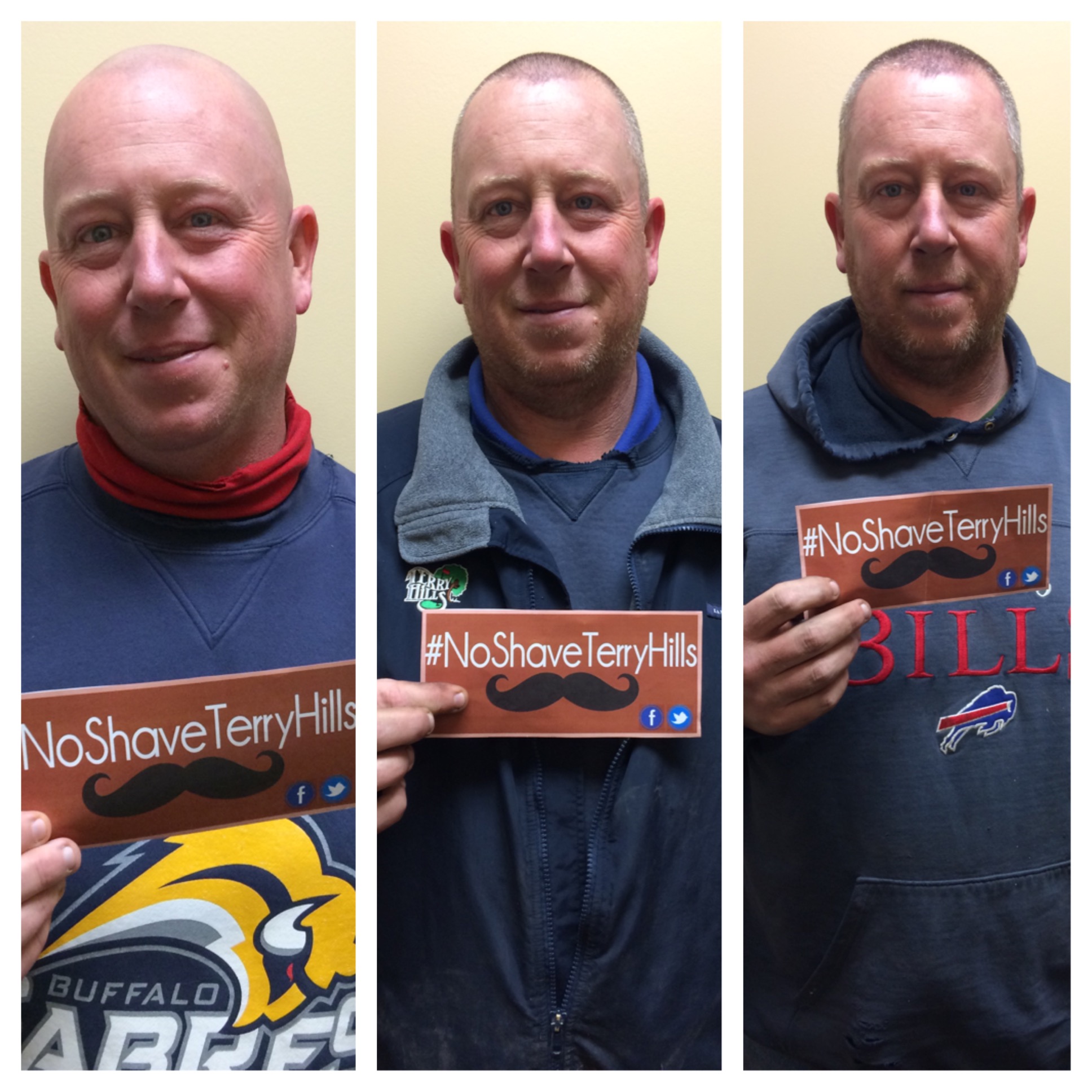 This November, we're adding in a twist where our fans can vote for which look stays: #baldThad or #hairyThad.

Enough with the boring details, here’s a little fun insight on him:

Outside of golf, what is your favorite hobby? 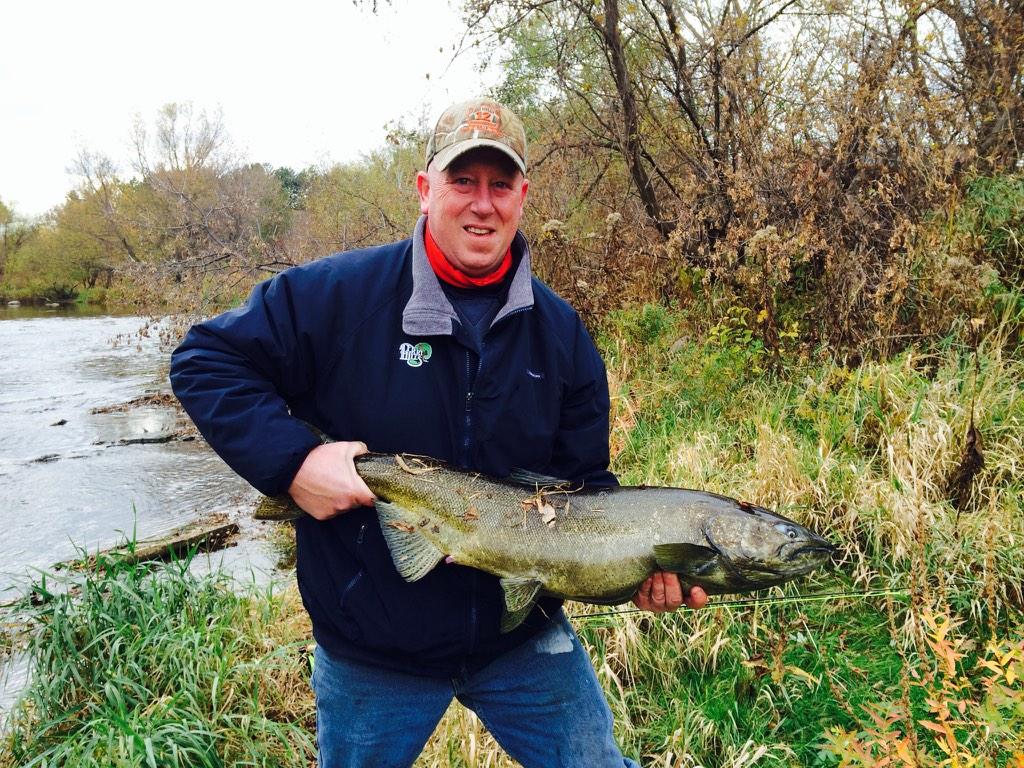 Neither vanilla nor chocolate, don’t really have a sweet tooth, but I’ll take a burger anytime.

Celebrity you dislike most:

Biggest challenge you face for the upcoming season?

Providing conditions that everyone expects

Thad says he’s poised and ready to go working on golf course accessories, and getting the course into playable condition. For those of you reading this hoping for an update on the course’s status, thanks for sticking through til the end!

We'll be open Friday, April 3rd for Walking Only! Past that, it's TBD. Don't you just love WNY weather? Close to 70 degrees one day, two days later a snow storm. We will be sure to keep you posted in more ways than one what the status of the course is, and when we'll be open past this weekend! Tee times are filling up quickly for Friday, so make yours before you miss it.

Finally, if you're ever curious about what goes on behind the scenes with our Maintenance Department, follow @terryhillsmaint or @terryhillsny on Twitter! Thad tweets (and we retweet) some great shots of himself knee deep in water, and other various tasks required of him to maintain the course. For example, here's a look at our famous horseshoe hole 14 from the eyes of the Superintendent:

Pumping to clear snow and ice 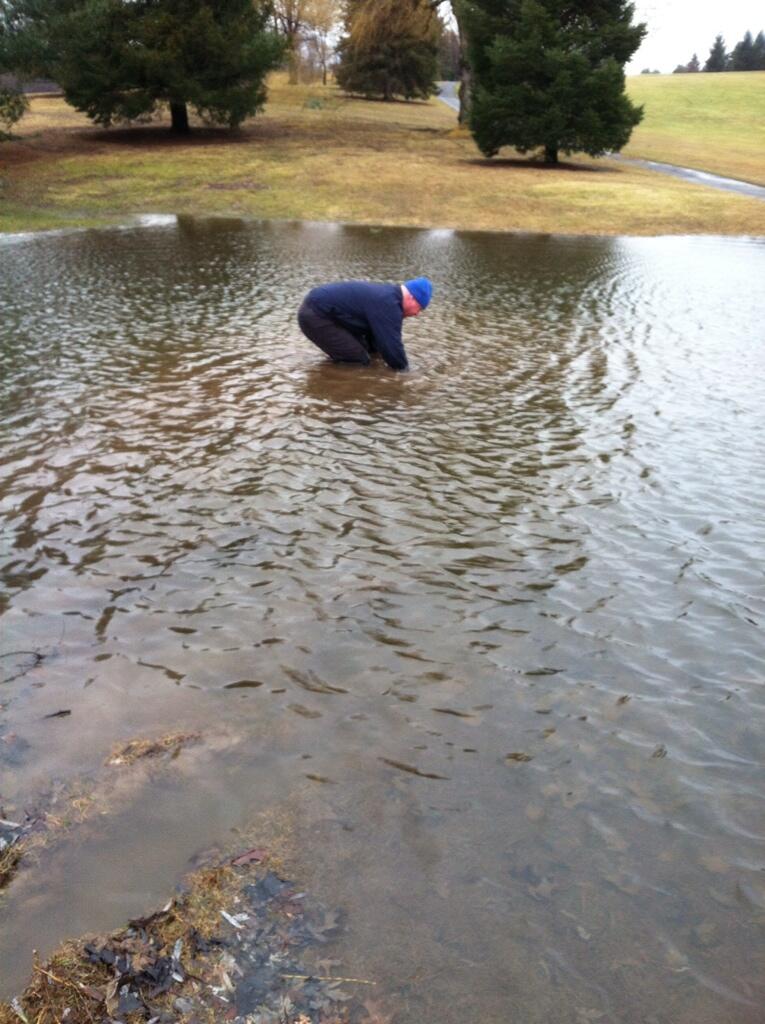 Fishing balls out, what else?

The last couple weeks have been eventful for us. Not because of our on-premise events, considering the course & restaurant are closed for the season; but because 3 of our management team were out-of-state for educational conferences! Our Banquet Manager, Danielle, and Director of Marketing, Darcy, got the 4-1-1 on all things weddings at the 2016 WeddingWire World Conference in Washington, DC (if you missed the recap of their trip, click here). Our Superintendent, Thad, flew to the opposite side of the country, not only to escape the zub-zero temperatures, but for a scholarship he recently won!
Our Superintedent, Thad, was awarded a scholarship by the National Golf Course Superintendents Association to attend the annual Melrose Leadership Academy in San Diego. Obviously he won the weather lottery with 80 degree temperatures and endless sun, but he also won the conference lottery. Winning the scholarship meant an all-expenses paid trip to California plus extensive education tailored to golf course superintendents. 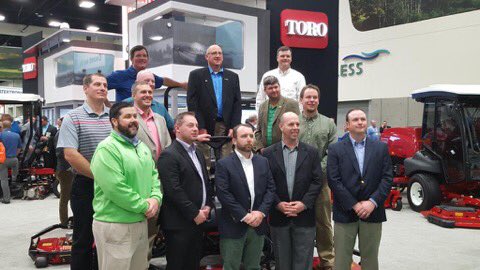 The 2016 Class of the Melrose Leadership Academy. Of course our very own is the only one hiding (blue shirt, bald head, second row from the top).
As a golf course superintendent, you are required to attend annual continuing education seminars (at least in the State of New York). These seminars allow superintendents to keep their certifications in certain areas, like for example- pesticide usage. So while extremely useful, they cover the same topics year-to-year. For Thad, the Melrose Leadership Academy was an incredible opportunity to broaded his horizons, and learn about topics that aren't often touched upon. Some of the Melrose educational sessions lasted up to 4 hours, but he never once found himself losing interest.
The Melrose Leadership Academy also coincided with #GIS2016 - the world's largest Golf Industry Show. So on top of a week's worth of educational seminars for superintendents, there were also hundreds upon hundreds of golf industry vendors. The show spanned 250,000 sq. ft, which would be a lot for any person to cover, and especially for Thad who hadn't been to the show in over 20 years. From the latest equipment, to the newest technologies, to turf expertise, to facility services, there was plenty to learn. 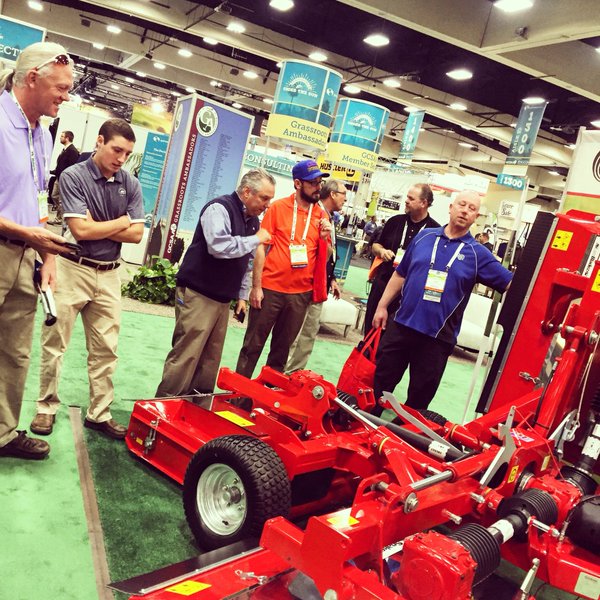 Thad (in blue) checking out the Trimax Snake (industry-leading mower dedicated to golf courses)
For more about the Melrose Leadership Academy, GCSAA, or GIS, click here.
Have any questions for Thad about what he learned at the conference? Email them to us at This email address is being protected from spambots. You need JavaScript enabled to view it., or follow him on Twitter, @terryhillsmaint.

Terry Hills Golf Course is well-known in the area for being a first-class public course. The 27-hole complex which is home to the Jim Kelly Celebrity Classic, already boasts honors like a 4-Star Rating by Golf Digest. However, this new award brings Terry Hills and it’s hometown of Batavia to a higher standing regionally.

With 3 out of the top 5 placing courses located in the Greater-Buffalo area, it is no surprise that the city of Buffalo is home to its fair share of championship public golf courses. Willowbrook Golf Course, located in Lockport, took home the title of Runner-Up, while Sheridan Park Golf Club of Tonawanda and Seneca Hickory Stick Golf Course of Lewiston helped to round out the Top 5. However, the 1st-place finishing Terry Hills helps to give Buffalo a run for their money.

Never before had Terry Hills ranked number one among other public golf courses in such a wide cross-section of Western New York. This new honor may help bring golfers from the Buffalo-Niagara region out to Terry Hills and Batavia alike.

To see the rest of the poll standings, visit http://buffalogolfer.com/wordpress/best-public-course-of-2015-as-voted-by-you-is/.

In addition to the premier golf course, Terry Hills offers a banquet facility and restaurant, highlighting panoramic views of the course and an outdoor covered patio. Terry Hills specializes in golf outings, weddings, as well as corporate and private events.

For more information about Terry Hills Golf Course and Banquet Facility, please visit www.terryhills.com, or call the Pro Shop at (585) 343.0860.